About this time of year, someone usually says it, and it’s something like remembering that fly season has started. You do what you can, but you still have to get out the swatter.

“This place is too commercial.” 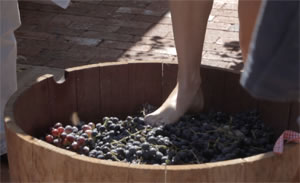 As it happened they were talking about another farm up here in Oak Glen, but, for the life of me, I don’t understand what they actually mean by this. I reminded them that if it weren’t for a few crowded harvest days a year, some of these farms would be rural private estates with “no trespassing” signs on every border.

First of all, I don’t even get it when someone says Starbuck’s is too commercial. Listen, people! We’re in a depression! We need commerce. We can’t all take long term employment with the census bureau. Commerce is the way most of us make a living, so when someone opines that things are “too commercial” are they pining for Eden? Are they longing for some earth maiden who can dispense all their material wants without soiling the moment by mentioning cash?

I think a few of these people do exist. We actually have people ask “is there a price for pumpkins?” or “do we have to pay for the apples?” I’m tempted to respond, “pardon me, I just had a brain-fade. What planet is this?”

My guess is that when someone says something is “too commercial,” they are lamenting something about the transaction itself, the swiping of a debit card, or thermal printing of the computer-driven cash register tape. They want to see a perky sixteen year old girl, ciphering the transaction in her head and writing the amount in an account book, with no actual money changing hands. They want a “just between neighbors” exchange, even though they live ninety miles away.

A part of the problem is a conflict of images. We do look like a farm, for the most part, and people see their grandparents on a farm somewhere — but their grandparents don’t have any cash registers or menus or directional signs. Of course, all farms, since the garden of Eden, have been commercial enterprises, but it’s a single transaction at the end of the season, where a fruit broker writes a check for so many truckloads of plums or so many tons of wheat. The day to day illusion is that there isn’t commerce going on, but it’s one big commercial enterprise from seed-credit to crating and shipping. The whole year is spent in pursuit of the big sale.

Some people just don’t like the crowds, but on one level they should be grateful for the crowds: they keep prices down. The very same people who don’t like crowds would yell the loudest if they were charged for what a day of solitude would cost on the farm. You would think the “anti-commercial” crowd would be big fans of the common man, but sometimes the ones who lament commerce are something like the royal family — they never carry any cash, and they resent any place where lots of people are spending it. Commerce-bashing can really be a mask, in other words, for elitism.

And don’t get me started on the “non-profit” and “civil service” folks who just can’t understand why there isn’t a grant available for everything from bookstore inventory to heirloom seeds to barn restoration.

“Can’t you get a grant for that? Does it have to be so commercial?”

There is one person who can lament commerce as far as I’m concerned. I’m very fond of Him.

He’s the guy who turned a few fishes and loaves into a huge feast.

Unless you’re HIM, don’t complain about business around me. The business of America is BUSINESS.