The Road to Courage

The Road to Courage 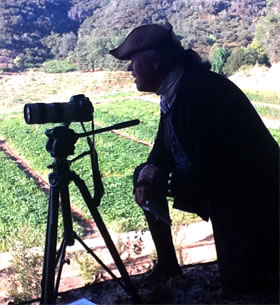 I started writing here sometime in 2005 and, not having taken up residence on blogspot or blogger or wordpress, I didn’t have much of a read on who was following me, except for a few emails now and then, and the sense that when people were interested in the farm, they were checking out this space for the news. I can remember commencing this when I didn’t have much of a sense for what the term “blog” actually meant. I always thought “journal” or “diary” were more dignified terms, but I’ve come to realize the internet needed its own term for the kind of public scribbling that goes on here.

The truth is I’ve been writing more or less constantly since I fell in love with literary fiction in about the fall of 1981. I wrote short stories at Stanford, as an undergraduate, and I would write a semi-public journal, in response to our instructors’ advice. I’ve written as a way of trying to figure out my take on the world, and, frankly, I will extend this wisdom to everyone, not just writers: you don’t always know what you think until you try to express it. It’s good for the soul, even if no one listens.

But, to be honest, I’ve always thought that whatever talent I had at this sort of thing was misspent. My wife will tell you, I would invest hours, even days, in internet flame wars. Revlist. CompuServe. America Online. Freerepublic. Xanga. Facebook. A thousand different arguments, all burnt away when the pixels faded, and what did I have for it?

I suppose the near constant urge to scribble helped me build this living history program. The place has called for endless scripts, and through some blessed turn of God’s providence, my daughter wound up marrying a young man who can’t stop writing plays and scripts. So I can’t say it hasn’t gone un-rewarded. We’re building a community of writers and artists and actors here.

A few people protest, “but you’re a farmer! Stick to farming.” I suppose if I have to explain why that’s misguided, I would be engaged in another flame war. (If you don’t get it, you never will.) Riley’s Farm is a farm, but it’s more about culture than anything else. We write, or we die.

Still, I have six children, and an abiding, tireless desire to save the world from all the pop trash that keeps piling up. I want to tell a story that will make people think life is worth living. I want to enjoy the Frank Capra moment, and I believe I’m on my way, because I’ve had a small part in creating one.

It’s right here. You have to watch the movie to the end to get there, but it’s honestly one of the best things I’ve ever done.

And I intend to keep doing it.

But I understand there are long time friends of the farm who want to know what’s going on in this particular place, who want to hear about our friends, and family and staff, so I’m going to give this a little time every few days, but I do have six children, and I need to feed them, so if you think what I have to say is worth hearing, I have a group subscription blog here (only $17.76 and you get two DVDs for the deal).

If you come along over to ColonyBay.net, you actually get to talk back to me as well.

Either way, thanks for following along.