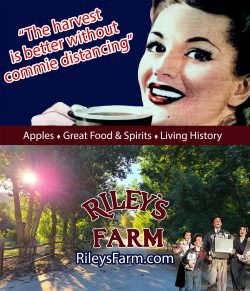 One of our local newspapers, the Yucaipa News Mirror, runs an Oak Glen edition every year, and — as you can see — I ran with a kind of “back to the old normal” belligerence theme.  (Click on the graphic for a larger version.)

There’s just something about a retro-beauty looking at the camera and letting the world know it’s okay to be normal that feels necessary during this era of global gas-lighting.  If you ever watch, say, a network or cable news babe — hired for straight teeth and immaculate makeup — interviewing Dr. Fauci as though she were actually capable of asking pertinent scientific questions, (and he were capable of answering them), you can’t help thinking that our era calls for merciless, biting satire.  We are ruled by imbeciles, being interpreted by imbeciles.  No wonder, a Carnegie Mellon study recently indicated that PhDs are among the least likely to take the vaccine.  The smarter you are, the more difficult it is to comprehend both Covid policy and a president who evacuates a third world hell hole, before getting American citizens to safety.  We need more sane, apple picking beauties, more sane families, and less abject obedience to idiots parading as experts.  We need the sort of people who are relieved by well directed insult.

I’ve been saying that Riley’s Farm is a place for normal people, but it’s also a place for thinking people.  My guess is that most Americans are tolerant enough to allow people to make their own decisions about masks, vaccines, and social distancing, but that weird, totalitarian impulse to insist “we all most think, and act, EXACTLY alike” should bother you more than a little. When I get around Covid Pharisees, it feels something like what it might have been like to be around Lee Harvey Oswald getting agitated at a cocktail party.  These people are in OCD free fall; they might blow a gasket at any minute.  Vaccine-mandatory people are just a few notches better, emotionally, than active shooters.

Most of what we are being told about the Commie virus is pure nonsense.  Follow the links in my blog.  A lot of very smart people are beginning to wonder if the biggest casualty of Covid policy will be trust in science itself.

Composing a print ad, by the way, is beginning to feel weirdly archaic.  I can remember back in the 1990s paying more than $600 for a minuscule 1/4″ high ad in the Los Angeles Times Calendar section.  You could barely see the ad.  (I think I tried to squeeze a Victorian Santa Claus into that space.)  At that time, for those of you under 30, consumers were in the habit of consulting a printed entertainment guide once a week, and you found your way as a vendor, at great expense, into one of those publications if you wanted a chance at making sales.  Ideally, you earned, at some point an editorial write-up, (which was, and is, worth a lot more than an ad).

It’s odd that in this digital age, where ads fly by on people’s mobile feeds, I actually feel more “ad permanence” with an internet ad than I do purchasing a print ad.  In the old days, people kept the printed guide around for a few weeks at least, but these days, the printed image may fall prey to a de-cluttering impulse.  It’s just there long enough to remind people to look up all the details on the internet.

I’m sensing more fun, irreverent retro-ridicule in our future.  The goal for a print ad should be “unusual enough to go up on my refrigerator.”