How I Learned to Stop Worrying… 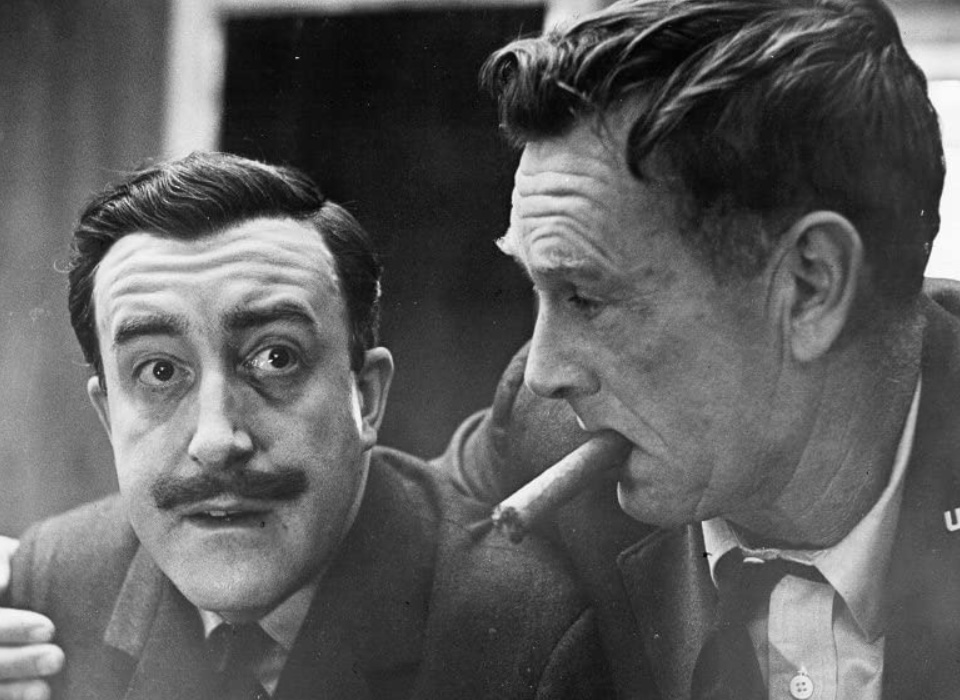 How I Learned to Stop Worrying…

The Baggage We Carry Around

Our family took a little break in Temecula this weekend and when I returned our repair-loaner car (the one we took on vacation), I forgot to remove Mary’s skillet in the trunk, so there I stood in the dealership parking lot wondering what to do with all that cast iron.  I decided to set it on a sturdy-looking utility cage outside the cashier’s office, risk it being stolen, go inside, settle up, and then wait for my car outside.

(Just a little note to the self-conscious: very few people actually care if you take a big cast iron skillet inside the dealership. They don’t see the sizzling fajitas and grilled onions your whole family enjoyed over the weekend.  They just see an old guy in a car dealership carrying a big, black piece of iron. They just think you’re a little weird. No big.  They won’t call security.  Probably.)

So when I returned home, safely, with the repaired vehicle, Mary told me she just purchased that skillet at WalMart, via Instacart, and this makes me think I endured a lot of pointless self-conscious energy for no purpose at all.  In other words, I was not protecting a priceless, culinary jewel with a family history of feast celebrations.  Who walks around, coveting new aluminum and steel sports cars, holding a big piece of pure heavy iron, if what I’m holding was purchased on Instacart?  Not me.  Like I say, I left it outside.

You learn things on the freeways.  I passed a young lady who was absolutely BELTING out some jazzy number, complete with all the shoulder dance moves and neck-bobs driving would allow her.  She was on fire.  I got the sense, glimpsing her, that she was articulating some need we all have to turn our heart-volume past the breaking point.  Something has to be important enough, meaningful enough, to scream about.  God bless that young lady.  God bless us, everyone.  May we all find some truth worth that sort of drive-dance. 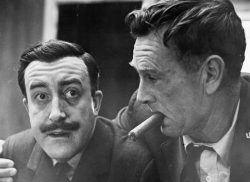 My son Samuel was watching Dr. Strangelove with a friend yesterday afternoon and I got to thinking that one of Peter Seller’s characters in that film, Group Captain Lionel Mandrake, is a metaphor for those of us who simply can’t accept the new normal, brought on by public health’s response to the Commie virus.  Captain Mandrake,  the sane Englishman trying to make some sense of Ripper’s worries about “sharing precious bodily fluids,” has the same reserve all of us display when confronted with someone who is going stark, raving mad:  we don’t really want to believe it.  We really don’t want to believe it when the person standing in front of us is vested with extraordinary official power.  Think about it.  General Ripper doesn’t want to share his precious bodily fluids.  Dr. Fauci doesn’t want to shake hands and would be entirely happy with your children wearing masks for the next two decades.  Fauci is so completely uncorked he’s demanding the entire world receive a third, powerfully untested booster shot.  With mounting evidence the vaccine isn’t actually working, (and may be making things worse), Fauci is beginning to look like a witch doctor insisting that one more jab of the voodoo doll will do the trick.

And then, too, when someone goes crazy at the top, there are the dutifully obedient types within the system who simply do what they’re told.  On the verge of a nuclear holocaust, Colonel ‘Bat’ Guano, (Keenan Wynn) recoils at stealing quarters from a soda pop machine so as to use a pay phone to reach the White House.  Major ‘King’ Kong (Slim Pickens) follows orders and rides an H Bomb into oblivion, after speculating that his crew will receive commendations in the world-ending aftermath.  It’s all a place of dreary, conventional functionaries with no sense of irony.  “Gentlemen, you can’t fight in here! This is the War Room.”  Contemplating an actual nuclear war, General “Buck’ Turgidson (George C. Scott) attempts to make the death count palatable: “Mr. President, I’m not saying we wouldn’t get our hair mussed. But I do say no more than ten to twenty million killed, tops. Uh, depending on the breaks.”

It’s not a stretch, at all, to see the Covid story through the Strangelove lens: a senior bureaucrat, Fauci, in love with promising, but dangerous, genetic engineering technology. A public health establishment embarrassed by their own mistakes and willing to not only understate them, but lie about them.  A public health establishment, supported by a legally immune pharmaceutical industry, that doesn’t care how many people are killed by the vaccine itself?

President Merkin Muffley: General Turgidson, I find this very difficult to understand. I was under the impression that I was the only one in authority to order the use of nuclear weapons.

General “Buck” Turgidson: That’s right, sir, you are the only person authorized to do so. And although I, uh, hate to judge before all the facts are in, it’s beginning to look like, uh, General Ripper exceeded his authority.

And that should provide some perspective.  Kubrick’s General Turgidson, in a dark comedy, is more accountable than real life epidemiology’s Anthony Fauci.  At least Turgidson speculated about blame.  Fauci was blaming bats when he should have been blaming bat lady scientists with funding sources in America.

Look at these numbers, folks.  You can download them for yourself.  Largely un-masked, un-social-distanced Sweden, lagging behind the U.S. in vaccinations for months, endured the pain of natural herd immunity and appears to have utterly flattened the Covid death rate per million.  It will be interesting to see if vaccination changes Sweden’s success for the worse, long term, as many believe the vaccination itself is creating new threats through antibody dependent enhancement.  At any rate, given the risks associated with a vaccine that has no long term trial, do these results warrant intimidating everyone into vaccine compliance?

When will the grown-ups weigh in on this?  Will someone tell our elected executives at every level (presidents, governors, mayors) the public health war room is full of ass-covering incompetents? 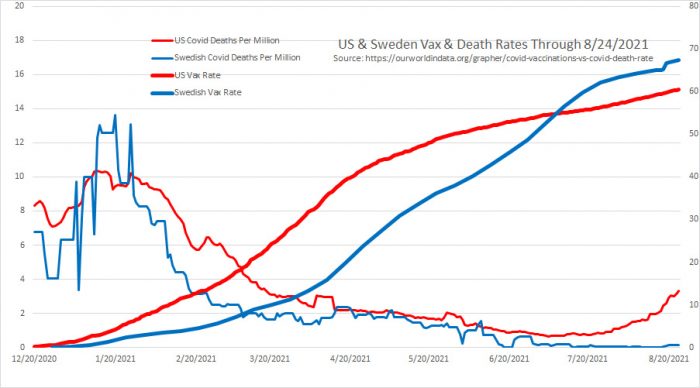 We’re a U-Pick Farm After All

The zinnias, by the way, are now up and showing off their petals.   Somethings work in this world.