Why Do We Re-Live History?

Why Do We Re-Live History?

I believe I hired a seamstress to sew my first 18th century clothing in 1992 or 1993, which means that I have been re-living the past for nearly 30 years.  I happen to love the years between 1774 and 1776, the years where the war for America was fought in the minds, heart, tears and blood of the people.  I’ve known American Civil War reenactors who have been at the hobby far longer than I have, so we’ve often observed together–half-humorously, half in awe–that grown men and women have been re-living a war that lasted four years, for the entire span of their lives.  In truth, some babies were conceived at living history encampments and those children have carried the tradition through their lives.

Some truths, some stories really are that worthy of being remembered.

After all, what is Thanksgiving?  What is Passover?  What is the 4th of July?  The small towns of New England would stage reenactments of the Revolutionary War well into the early 19th century and John Paul Jones reenacted his naval victories for the French nobility.  If you love period movies, you are a living historian of sorts.

As a small child wandering around the backyard of my parents’ Arcadia, California home, beneath the centuries old live oak trees, I wondered what tribes, what cowboys, what farmers might have walked on that ground years before.  I think this is a universal childhood reverie because I see it on the face of every little girl who gets out of a minivan here, positively exultant to walk our farm wearing her new prairie dress.

Having said all of that, I have to report there is a sweet mystery at the center of it all.  I don’t really know, precisely, why I do what I do. There are some early evenings where I can hear Freeman’s fiddle playing St. Anne’s Reel or Dorset Four Hand Reel in the tavern;  it conveys a calmness, and a certainty, and a beauty that seems to say, under the absurdity and cruelty of this life, “I am with you forever, until the end of the world.”

When I see a beautiful young mom dancing in the Hawk’s Head with her teenage children, and I can tell the happiness in her smile is completely unfeigned, I sometimes have to look out the window and grit my teeth, so as to keep the little ones from saying “why is that old man crying?”

When I get to shout the words of Patrick Henry “our brethren are already in the field,” I know that some of my ancestors loved truth more than their own lives, that “greater love hath no man” is a powerfully humbling reality.  Try saying that to a friend:  “someone died for you.”  See if it doesn’t create a silence that is baptismal.

Does that mean history is uniformly glorious?  Of course not.  The heroism of history is only made possible by the ugliness of history.  King George treats his subjects like peasants, and that is the very reason we are allowed to witness the bravery of those who opposed him.  The ugliness of lifelong, race-based slavery gave rise to the aching poetry of Frederick Douglas.  The butchery of Mao and Stalin was relieved, and conquered by the sunny, American optimism of Ronald Reagan.

It’s a story, folks.  God is telling the story.  It’s important to know it, and re-live it. 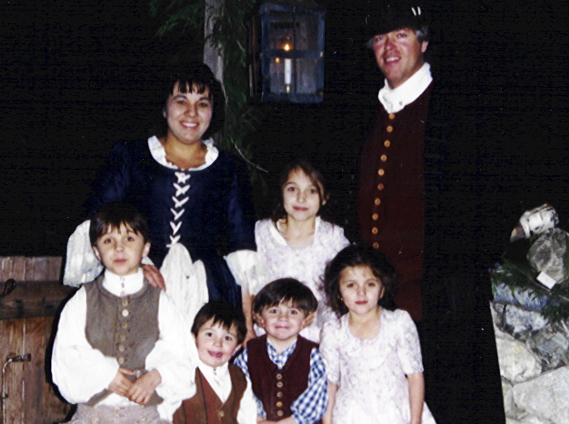