I can talk about this stuff now, I guess.

You have to be at least a little bit nerdy, or theological, to get this joke, but it had me giggling too much in a public place yesterday… 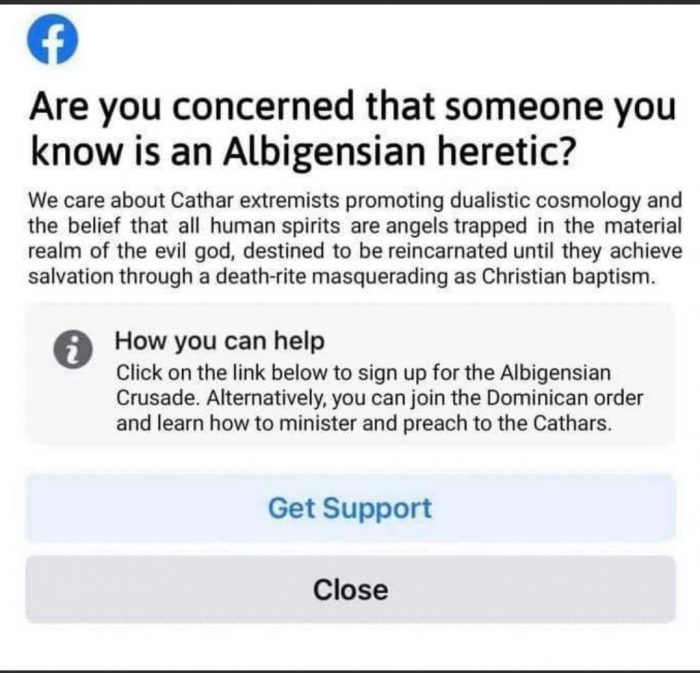 Ponder this other-worldly reality:  up until about a month ago, if you posted any articles even hinting that Covid-19 came from a laboratory you would run the gauntlet of “fact-checking,” jailing, or de-platforming.  (It’s not clear to me why the elites have now allowed the truth to come out.  It came from a Wuhan virus research lab.  Maybe the evidence was just too massive to hide?)  Discussing the lab-leak theory might even result with an accusation of anti-Asian prejudice.  Please, folks, THINK.  When we lament a virus caused by a Communist regime, we aren’t even thinking about race.  We’re talking about a political ideology with the blood of multiple millions to its credit.

When YouTube warns content providers that favorable discussion of Ivermectin could result in demonetizing a channel, when recounting personal stories about people who have had horrible reactions to the vaccine gets you “fact-checked,” when wondering aloud about voter fraud earns you a blacked out meme — what, really, are we witnessing here?   When public health officials somehow thought every small business in America could devote time and money to social distance policing, what are we seeing?

I’m slow but I catch on eventually.  Here’s the way it works:  you actually WANT to run a business, a little place of your own?  Open to the public even?   You don’t want to be a civil servant and retire at 55 and live for another 30 years on the taxpayers?   You actually WANT that sort of punishment?

Well, sure, you can do that if you like.  You can have some social media accounts. You can try for a little profit, here and there, but you have to do what dear leaders want you to do.    You have to help them keep that Overton Window very, very narrow.  If this month’s campaign is “pride” or climate change or “we’re all in this together” or “let’s all get the jab,” then you better not ridicule the script.  You teenage boys in the back, making wise-cracks?  Yes, you.  You are NOT helping.  There will be no questioning this, understand?

It all makes so much sense.

Government knows it can’t get anything done.  Can you imagine buying a hamburger from the DMV or a cell phone from the FCC?  No, they know it’s far better to let some poor capitalist try for the unlikely profit, serve the customers, pay taxes and, in return for that privilege, small business owners are asked to remain silent, do the police work for the government, and follow the script.  The messy job of keeping the Overton Window the size of a keyhole would look far too creepy if it were attempted by government itself.  No, you need Coca Cola reminding you, when you slurp a Diet Coke, that you really should consider your whiteness to be a problem.  You need Marriott Hotels and Disney warmly cajoling you to take the jab.  You need Delta airlines reminding you that diversity is more important than pilot-expertise.  That is the script, you idiots!

Years ago, before the 2007 Great Recession arrived, I recall a story about a corporate financial titan, testifying before congress (someone find me the video), and making what sounded like an alarming claim:  the world’s mega corporations had the efficiency and the power to “manage” the globe.  Turn the policing over to them.

It seems to be happening, folks.